You may have noticed green diagonal "guide lines"on some of the board images on this site, radiating from the four corners of the common playing area. These serve as an aid for players, providing a frame of reference for the eye on the large grid of holes. But why are they located just where they are? The answer has to do with ladder chases and the fight to get past your opponent to reach your border rows. There are several types of such ladder chases. 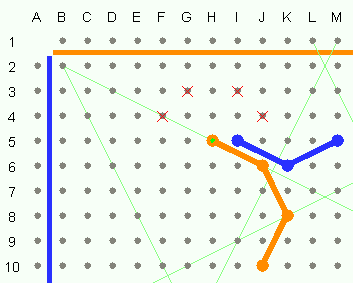 Blue is to move here. Orange has too many threats for blue to handle. Blue can cut off three of the four linking threats by linking to G4, but orange is on the guide line leading to B2, and cannot be prevented from reaching the orange border. This "close" ladder is usually very bad from the defender's standpoint (in this case, blue.) Note: The difference between "defender" and "attacker" usually depends on which border row is closer. 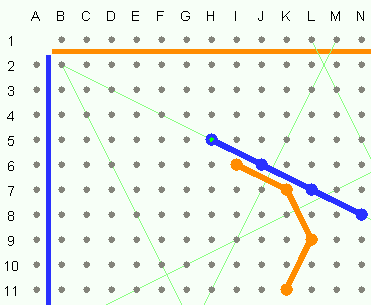 Here is another close ladder, but blue now has reached the guide line. This is certainly better for blue than the above diagram, but it's not necessarily a certain corner win. Orange to move has the option to fall back with an Achilles defense at D6 for example. But at least blue has a fighting chance, which was gained by reaching the guide line. 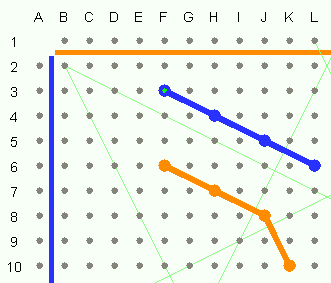 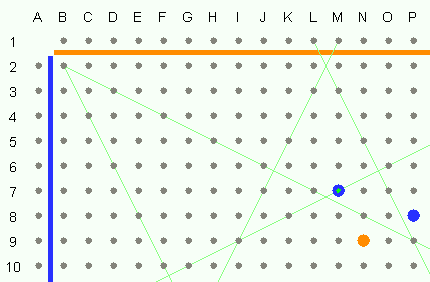 Not all ladders consist of opposing chains of linked pegs. Here blue tries to block orange at M7. If the orange peg were linked to a peg on row 11, orange would have a relatively easy win with M6 or M8. But if orange tries that here, blue could respond with O8* which threatens N10*, possibly connecting to other blue pegs elsewhere on the board. So instead, orange plays K8, and blue replies with J6, reaching the position of the next diagram. 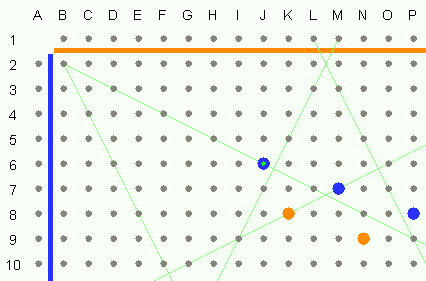 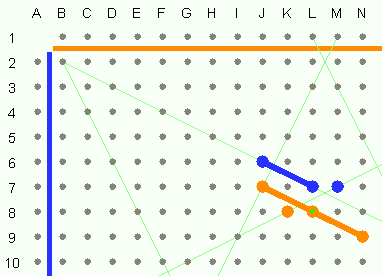 Now orange threatens either M6* or i5*. There were other tactical shots available for both sides, and depending on the location of nearby pegs for either side, this battle might have gone quite differently. It is precisely for this reason that this particular 3:1 ladder pattern rarely lasts more than a couple of steps. 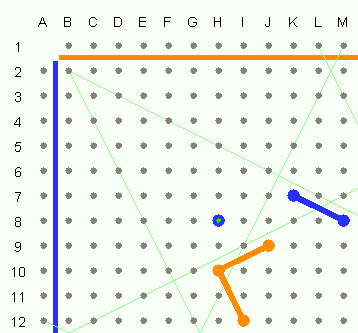 Here is another example of a sort of ladder pattern which usually doesn't go beyond a couple of steps. This one proceeds at a 1:1 slope. Orange to move starts the ladder with 1.G6 threatening i7**. so blue blocks with 2.i6**, and then 3.G8* completes the first ladder step (next diagram.) 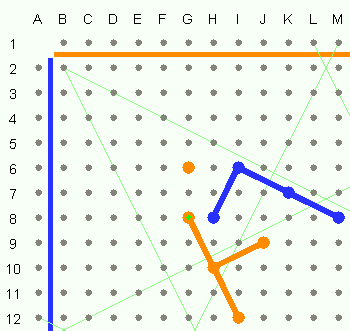 Now it might seem that blue can return the favor with 4.E5 threatening F7** or G5*, but orange can end the ladder with 5.F6*! 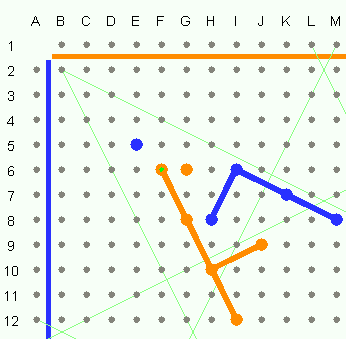 Now if blue plays 6.G4* orange has 7.H4* smashing through. Blue cannot prevent orange from connecting these two groups, so there is no local draw here. For example 8.F7* blocks orange from double linking at E7, but then orange can play 9.-F'7F8* (which means remove the link from F6 to G8, then add a peg at F8 and link it to G6) with too many threats for blue to handle.


There are lots of other ladder patterns, and before you enter into one, you should always ask yourself if this would really help your position. It's generally disadvantageous for one side to participate in a ladder as opposed to playing elsewhere on the board, so in games between strong players, ladders tend not to play out very far. Klaus Hoffmann's "Mousetrap" article shows how it can be disadvantageous for one side to play out the locally winning side of a ladder, because to do so would hurt that player's position over the whole board.